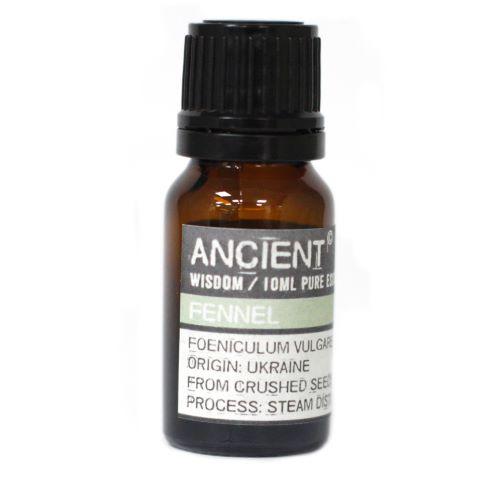 Fennel Essential Oil is extracted from the plant Foeniculum Vulgare Var Dulce, which is sweet fennel, also known as Roman fennel. It is extracted from the plants' crushed seeds by steam distillation. The oil, like the seeds, is good for digestion as well as a host of other ailments. It is used in aromatherapy to treat oily skin, wrinkles, and obesity. It is said to boost courage, resolve, and strength.

This oil is a popular remedy for digestive problems like flatulence, constipation, colic, nausea, vomiting, anorexia, and dyspepsia. It also helps in weight loss as it is said to promote the feeling of a full stomach. Its diuretic effect is believed to help disperse cellulite. Fennel oil is supposed to tone the spleen and liver. It has a cleansing and toning effect on the skin, and helps with bruises. Please note, this oil should not be used in large doses, and should avoided altogether in pregnancy, lactation, and those suffering from breast cancer, and epilepsy.

The word Fennel is derived from the Latin 'foenum,' meaning 'hay'. In medieval times, it was known as 'Fenkle'. It was a popular herb used by the ancient Chinese, Egyptians, and Romans, who believed that fennel helped give longer life, and improved a person's courage and strength. It was also believed to keep away evil spirits. It is said that fennel was used to strengthen eyesight, to cure snakebites, and ease colic. In India, plain, roasted or mint-coated fennel seeds, called 'saunf' are often served after meals to help digestion.

Essential oils should not be used neat on the skin, they should always be diluted with a carrier oil (base oil) first and generally no more than 2% essential oil to carrier oil. Keep essential oils away from children and pets and avoid contact with the eyes. If you are pregnant, breastfeeding or suffer from any medical conditions, it's best to consult your doctor before using essential oils.

Your order should reach you within 2-3 working days, but sometimes, due to circumstances beyond our control, such as the unprecedented number of people opting for online shopping and COVID-19 related restrictions at mail processing centres across the country, deliveries can sometimes take a little longer. If you have ordered multiple items, occasionally, these may arrive separately.

We make every effort to ensure our inventory is accurate, however in rare cases an item may go out of stock after your order is placed. If this happens, we will contact you by email to let you know and return the cost of the item to the card that you used to make the purchase. If you have ordered multiple items, we will send you the in-stock items and refund the cost of the out-of-stock item(s) to your card.